Has it really been that long...?

How many times have I used that as a header?
Well, lots probably.
Whatever, there's been so much going on recently, I don't know where to start.

I finished the translation for my mate Andi Renson. Actually it was a lot harder than I thought it would be, but I managed it in the end. I then sent it to Paul Rudd to have a look and make sure the English was OK, and not a sort of half English, half German mish-mash. So he decided to do a complete rewrite!
Anyway, I then went through his edit and hopefully it's all Kosher, as they say in Tottenham. Andi's happy with it, that's the main thing.

So, Mr. Renson then made a cover for, "The House in " for me and I love it! It's only the front right now but here it is. 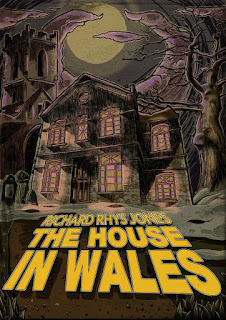 Recently orphaned by the bombing of at the start of World War Two, Daniel Kelly is evacuated to the relative safety of in , unaware of the evil that awaits him.

On his arrival he is cast into the terrifying realm of Satan and his acolytes, a world of escalating human sacrifice and voracious desires, in the form of a village priest and his seemingly prim housekeeper.

Will Danny, isolated, inexperienced and vulnerable, survive where so many others have recently succumbed?

Or will there be another victim claimed by The House in ?

So what do you think? Sound good? Would you want to buy it or are you saving your pennies for that Mills and Boon Bumper Christmas edition?

I was also awarded my first One Star review the other day.
Well, it's been a long time coming and the world is full of haters, so I wasn't surprised. The timing of its discovery left a lot to be desired, (five in the morning, drinking a coffee before early shift) and it did ruin my mood until at least . However, the response of my friends was marvellous and it cheered me up no end at the support I received for "Division".
It's only a review from a hater who I'll never meet, so sod him.
Don't get me wrong, I know my book isn't the best thing since sliced... err...Chapatti? It's a fallible and naive as any first book.  However, his points were laughable and the only thing that really grates is the "One Star Scar" on a very respectable run of Amazon reviews.
So, enough of that, move on Jones, move on.

Right, that's it for now. Any news, I'll let you know about it around six weeks after it's happened. That seems to be as prompt as I get nowadays.
.
Reggie