My next few offerings.

2013's knocking on the door and I have so much to tell you it hurts.
That's not because a lot of things have happened recently; no, it's because I haven't been on here for ages... DOH !!
OK.
Well firstly Paul Rudd, a mate of mine from , (yes, I know people in , don't tell everyone) and I have written an anthology of stories entitled, "The Chronicles of Supernatural Warfare. Volume 1." 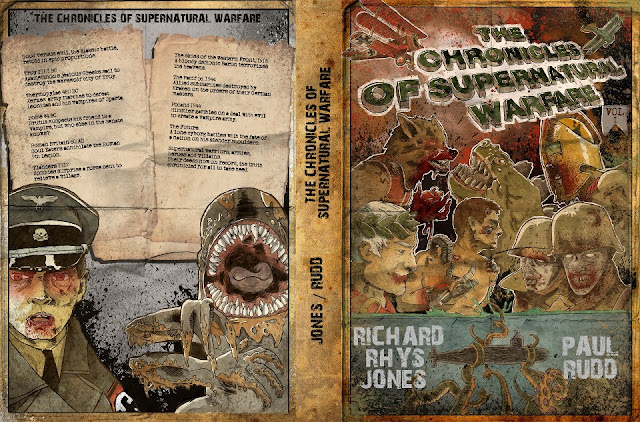 I've mentioned it before but for the uninitiated, I'll go quickly through it again.
The idea is a collection of stories cataloguing supernatural incidents in times of war through the ages.

My personal contributions are, "The 300 Vampires", The Wooden Wolf of Troy", The Bloody Ides of March", "The Zombies of Flanders" and "Blood Red Feldgrau". All stories that I'm very proud of and I hope you'll like them too, as long as you scrape the 99 pence together to buy it. :-)
If not, just wait for the free download promotion, which will definitely happen.

I have a second book in the offing, "The House in ". This came about from an email from Kathleen, asking if I was up for a challenge. Obviously thinking she meant a drinking competition, I said yes
How wrong can one be?

Anyway, what the publishers want is a story about a haunted house, along the lines of "American Horror Story" and "The Lady in Black". It had to be as creepily bizarre as AHS and as tense and dark as TLIB, so I decided to have a go.

I've finished it now and I'm just waiting on feedback from some friends and a couple of translations from English to Welsh, (yes, Welsh is a different language to English and a lot more than just finishing every sentence with a questioning, "See?")

The story itself is set in during the Blitz. The hero, a 17 year old orphan from , is evacuated to the quiet town of in . There, he's taken in by a disgraced vicar and his predatory house keeper. The background of the story is Devil worship and sexual obsession and I sincerely hope my mam doesn't read it... no, seriously, I do.
She will though.
DOH!

It's NOTHING like "Division" or any of the "Chronicles" stories I'm afraid. However, I like to think that the characters strike a chord with the reader, which as anyone who has read my work knows, is what I'm about. Also, I think the story is just as weird and gruesome as American Horror Story, but far, far bloodier.

OK, that's it. I'm translating a book from German to English for the guy who made the cover for "Chronicles" and then I have a couple of ideas that I want to run past Taylor Street to see if they're up for them or not?

Actually, yes!
However, I've been so busy recently that I haven't updated anything.
However, you've pricked my conscience now and I'll do a post soon ;-)