The House in Wales. A wee taster, which has nothing to do with drinking waste fluids I can assure you.

OK peeps, it's on!
The manuscript is now being looked at, edited, scribbled on, scrumpled up and flushed down the loo, (all part of the publication process, I can assure you), and the cover has been given the nod from the Boss.
Green light, green light !! 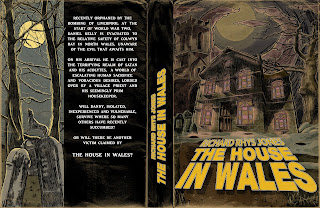 Chapter 1
The door slammed shut and instantly Danny was awake, reason screeching in alarm. He saw his breath like steam in the moon's watery light and a slight tremor passed through his bladder. Pulling up the bed clothes, he covered his mouth as his eyes slowly grew accustomed to the dark corners of the room. It was back and at that moment in time he didn't feel as brave as he had earlier. He'd been ambushed by sleep and now, after being bluntly woken by the slamming door, he felt vulnerable and scared.
It was freezing again and the small voice at the back of his mind needlessly reminded him the window was closed. Not daring to move, he waited for something to happen, his mind racing in unspoken prayer that nothing would.
Slowly the temperature changed and he sensed the cold retreating towards the closet. He could feel it ebbing away like a retreating tide, almost pulsing as it withdrew. It was leaving he told himself, willing it to be true.
Unexpectedly a small puff of cold air hit his face and he jerked back as something whispered hatefully into his ear, "Make no mistake, your mother's with me Danny and she's burning in hell for all the bad stuff she did for you."
Instinct's swift hand took over clear thought as Danny dashed under the covers, knuckling his mouth in silent, absolute terror; wishing he was dead so this horror could end.
................................................
OK, I lied, it did have a little to do with pee pee but not mine or yours.
Right, that's it for now.
Still haven't heard anything about the anthology, but all good things to those who wait; unless you're in an establishment that runs on a first come, first served basis that is.