Richard Rhys Jones Literary Productions, in association with Ravenous Roadkill Publications, are proud to present our third novel, out now!

Sounds quite official that does, don't it :D

It's only taken nigh on three years to write, suffering more stops and starts than the rise of Western civilisation, and was born of an idea thrown at me while I was signed to Taylor Street, and yet it's finally out.

Here's a quick reminder as to what happened...
The people who ran Taylor Street asked me if I would be interested in writing a story set in a famous hotel and casino on the Las Vegas strip? Their plan was to publish the book, and maybe have the hotel endorse it. They were given the go-ahead from the establishment in question, and so I began to write the book. However, six months into writing it, Taylor Street died a death and I was suddenly without a backer for the project.

However, I was so enamoured with the idea I decided to push on with it anyway. Then came Thorstruck and my new project took a back seat as the books they had so nicely taken on had to be promoted, which was only fair. Thorstruck were so cool and friendly that I could never have lived with myself if I just consigned Division and House to the back shelf after they had been edited, repackaged and rereleased.
Thorstruck were interested in an anthology of stories that Paul Rudd and myself had collected over the years, so we ploughed our energies into releasing Chronicles, and Sisterhood was thus kept on a low flame.

Then the Thorstruck thunderbolt hit, and once again I found myself without a publisher.

Wild Wolf stepped up to the plate and kindly offered to let Division and House take a place on their shelf... which was mega cool of them, truth be told.

Meanwhile. Paul decided to go ahead with Ravenous Roadkill and we released Chronicles and The Fiddler's Soul.
Suddenly I had space to move on with the novel, and after many stops and starts, it was finished.
Our good friend Poppet, in a flash of kind support, sent us a cover and the whole tome was edited and formatted by our good friend Kris Stone of Blue Hour Books.
I really love the way you guys stepped up to the plate and helped without batting an eyelid or demanding money.
You guys both ROCK!!!

Due to the intricacies of the German tax system, I decided not to be a partner at Ravenous, which would then be a multi national company...!
However, I will be helping with the running... which basically involves me sending Paul abusive texts and reminders of who the best footy team in the world is, (Liverpool, FYI).

So, there you have it.
Next stop is Gulag, The Division of the Damned part two.

Anyway, here's the blurb, then you may proceed directly to Amazon to purchase your book there, (but not you Poppet and Kris).

The Sisterhood of the Serpent.
The Nagani.

As ancient as death and unspeakably scarred with the marks of Leviathan, they stalk the gates of Hell for the souls promised them by their feeder cult, the Sisterhood of the Serpent.

Jim and Rebecca Gregory were just glad to be in the safe hands of the FBI after the botched attempt on their life by the Mexican mafia. However, that all changed when Jim found out which hotel the Bureau used as a safe house; Bailey's, on the Las Vegas strip.

Bailey's, where Jim's first wife had committed suicide sixteen years before to escape the clutches of an obscure cult in Colorado.

That cult, an all-female sect who believed God and the Devil were dead and salvation lay only in the demon Leviathan, had called themselves the Sisterhood of the Serpent.

Now Jim would be confronted by a past he never knew existed, and find himself fighting for his soul, and the souls of his wife and their unborn baby. 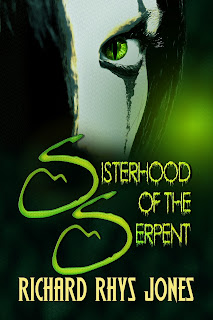