If there's one guy at Taylor who can manages to make me smile every time he writes on the Taylor website, it's Mike Church.

He has that cynical reserve that Michael Pailin perfected on his BBC travel shows; the ones where he'd be confronted by a naked Fakir standing on one leg wrestling a python and his only comment would be a raised eyebrow and dry smile.

If Palin ever throws the towel in, I'm putting Mike up for the job; I'm telling you, he's a natural for it.

I'm afraid I don't have a picture of the man himself, well I do but he wants me to use my Facebook profile pic, the one with my Dad pretending to sleep on my shoulder...

Whatever, as I wrote, dry smile and raised eyebrow. Here it is, (I can almost hear the muscles in his brow clenching to raise...) 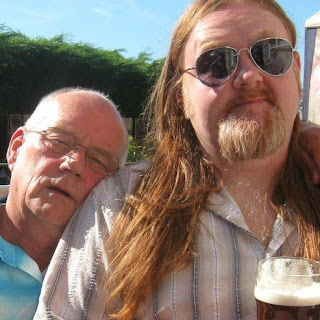 Anyway, here's the Blurb for Mike's first book, (on it's second run with a new picture and everything), called, "Huh?".

"It is not so much that Colin's adult education class is a riot – although lippy Jack and snide Nicola do their best to make it so, and even that nice, demure, octogenarian Miss Tedley has been known to lend a hand – it is more that Colin's own mind is a riot of conflicting thoughts around the luscious Amanda, life, school politics, literature and the rules of English usage, grammar and syntax.

And Colin does have an unfortunate name and a tendency to land himself in more trouble than he is already in - or, at times, under - as the world comes crashing down on him.

Will he ever prepare a class, get the better of arch-enemies Simon and Dolores, or seduce Amanda into paying any attention to him whatsoever?"

So now you know peeps.
Mike Church,
THIS IS YOUR LIFE...

Tell us about yourself
I did French at Warwick, then came out to northern Spain, where I’ve been working as an English teacher and director of studies ever since. My wife is a nurse but refuses to take my headaches seriously. We have two teenage ‘kids’ who are permanently broke and hungry.

What genre do you specialise in?
Other than flippant phrasebooks, I don’t specialise in anything, though I feel more comfortable writing comic novels than vampire romances. I hope to write a tearjerker one day, or anything serious, basically. Life’s not funny, you know.

What's your inspiration?
Music, favourite songs, dreams (real and imagined), the people around me, the silly things people say and do...  Plus, when all else fails, any outlandish “What if?” question eg. What if people took me seriously? What if I painted that apple orange just for the hell of it? What if I ran out of stupid examples after just two lines?

Who is your favourite author, why and did he/she inspire you to write in any way?
I have several favourite authors – Tom Sharpe, Joseph Heller, Kurt Vonnegut, Douglas Adams, Robert Rankin, Jerome K Jerome, Richard Jones, Timothy Hewtson… – though, much as I admire these wonderful  writers, and many others,  nobody has inspired me to write in any particular way. I write my way full-stop;  or semi-colon.

How do you feel about Taylor?
I suppose the first step is to tie him to a tree? Oops, wrong forum again, sorry.
Taylor? It’s very exciting, isn’t it! I have no idea where we’ll all be in ten years’ time but… What if Taylor were successful? What if we became a major player? What if I could think of a third question?

What are your plans?
Carry on writing of course.  I’d like to retire as soon as possible and, finances and health permitting, see the world with my wonderful wife. If we could stop off and have a coffee or beer along the way with all my virtual friends from Taylor, That Right and Facebook, well that would be a huge plus.
Go for it, sell your work. (Links, reviews, what ever you want).
I’m incapable of selling myself, so please visit my Blog if you’re remotely curious. Thank you.

No Mike, thank you mate and thank you for the nice compliment on question four.

Believe it or not, he's a good guy really, great taste in authors ;-)

All the best.
Reggie.

Im laughing out loud at you two. Great interview. x

Thanks Tee, I hope you're laughing with us though? ;-)

You're most welcome to drop by in Perth on your travels for a beer, Mike...whether I'll be here or not, who knows...great interview...I like the balance of humour with...well, humour...