My original plan, the one I dreamed of doing, only to have those ambitions wilt under the blight of my own fickle muses, was to write three books in The Division of the Damned series.

Book one I completed, buoyant and eager, fuelled by the naïve delusion that maybe I too could write a novel, become a writer, earn money from home, (along with all those other successful entrepreneurs who answered the ads in the classified section of Private Eye, Razzle, and Vogue).

However, it was not to be. My spotless cover letters and emails earned only rejection, disillusionment, and disappointment. This went on for nigh on three years until finally, the KO to my dreams and the biggest joke if irony is your thing, I was picked up by an amateur firm who led me, and a rook of other aspirants, on a merry dance.

Actually, it wasn’t merry at all. More like the funeral procession for my dignity.

Whatever, part two of the doomed trilogy was called, “Gulag”. I started it straight after Division was published and it has had more fits and starts than Boris Johnson’s Political Correctness lessons. The plot, Von Struck and his jolly band are now prisoners, and are confronted in the frozen Siberian Tundra by Komsomol Werewolves, is finished and I’m happy with it. Sort of.

… But that, dear reader, is where it has stayed.

50,000 words in and once again my ardour has retired with a headache and a glass of gin. I actually still like the idea, but she doesn’t want to right now…

As a little gimmick for part two, I was planning to release The Division of the Damned in paperback once again. Wild Wolf, who are in comparison to my first publishers bloody good guys, have given Paul and myself, Ravenous Roadkill Publications, the rights to publish Division in paperback. So I thought I’d release Div part Two in ebook and paperback, along with Div part One with the original cover. (My third publisher, Thorstruck, released it with a different cover, which was good but not tailor made for me like the first one was.)

Alas, I simply don’t have the necessary patience and maturity to see that marketing plan through.Last week Rod from Wild Wolf gave me the OK, Paul sorted everything out, and as of yesterday The Division of the Damned is out in paperback.The kudos is always in paper, and I’m so proud of that book, and basically waiting for me to finish Gulag is just too much to ask… So it’s now out there.

The book itself is not my best work and seriously needs an editor. It’s very badly paced, packed with far too much unnecessary information, and a story that drifts more than the Mary Celeste caught in El Niño. However, it was my first baby and now has its original cover, so I HAD to release it!

Some day I will come back to Gulag, but not right now.

Right now I have other porridge to stir. 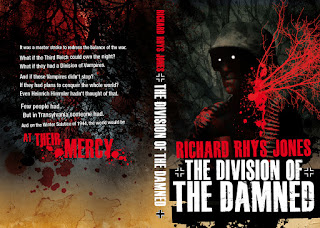