I never actually saw the point of learning to draw while I was in school.

After two years of studying for my art O level/GCSE examination I managed a resounding, "U" grade, (Unclassified: as in not fit to even be looked at because it's so bad.)
So I think it's safe to say that, when it comes to the study of transferring ideas into pictorial form, I rank amongst the biggest failures in the records of .

It's nothing to be proud of, I hear you cry; and rightly so!
I despise the whole Chav culture that celebrates idiocy, eulogizes ignorance and smiles fondly at indolence. The whole, "I'm cute cos I'm thick" attitude leaves me angered and slightly perplexed at its popularity.
However, I just didn't see the point.


My blinkered view of the future was to either be a reporter or a soldier and nothing else seemed important.
What was I going to do when the communist hordes sweep across the plains of ? Knock 'em dead with a great Ilfochrome Classic print?

It made more sense at that time to go out with a cassette deck and listen to The Clash with my mates, rather than do Still Life down the park; and at least the album was called, "Combat Rock"!
It sounds awful, I know, but that was the way I ticked around 1982/83. I tried hard in other subjects but with art I just didn't see the point. If only they had given me my first choice of woodwork...


Whatever, that is all by the by, because luckily for me I have talented friends who not only do kick-botty tattoos, but can also transfer pictures on paper straight onto the computer screen.

How clever is that??

Yes, once again The Chief, (AKA Chris Salmen of Combat Colour) has come up with a brilliant cover for my book.

I originally asked him if he had any problems with me using the Div. of the Damned logo he came up with in 2007, (is it really that long ago?) and he said, yes.

Yes, as in he does have a problem with me using the old logo.

"Harumph," thought I until I read the next line, he does have a problem with me using the OLD logo because he wants to make a NEW logo!!!

How cool is that then??

(Very cool, in case you're wondering.)

Anyway, here it is, the proposed cover for The Division of the Damned.
Enjoy... 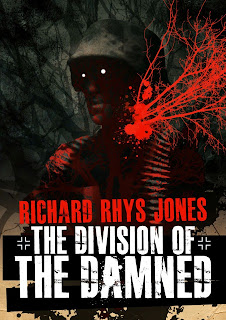 Cool or what?
(Don't answer if you don't like it, lol)

Now I REALLY like that 1.
I should be mowing the lawn but can't be arsed. :)

Reggie, I fully understand your lack of drawing skills. Pencils and pens were for writing words not drawing pictures! The worst thing any teacher could say to me was '... and illustrate it...' Anyway, the cover is great. Friends are wonderful, aren't they. My friend did Edge for me.

Reggie, I fully understand your lack of drawing skills. Pencils and pens were for writing words not drawing pictures! The worst thing any teacher could say to me was '... and illustrate it...' Anyway, the cover is great. Friends are wonderful, aren't they. My friend did Edge for me.

LOL Kris, I hear yer on the teacher thing ^^

I used that saying all the time, to varying degrees of acceptance, when I worked in a building firm.
Thanks for dropping by matey ´:-)

I've got photos of my dog with eyes like that. Do you think I should be worried about her?

I've got photos of my dog with eyes like that. Do you think I should be worried about her?

Is it in the SS?
Then yes. Otherwise I wouldn't worry about it ^^

SO COOL and so appropriate! It looks like those old covers in books that had real terror! Like yours : P

By The way: why is it that everytime I come by your blog, and it's so rare right?, you are always off to mow the lawn now?

LOL, thanks V.
I'm always mowing the lawn because I have so much to mow ^^
I'm the only one that cares about it as well, my wife and kids would let it grow so it looks like bloody Borneo if I wasn't here... chunter chunter... ;-)

Forgiven ?? course mate I haven't been there for a while myself?